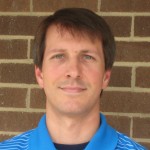 Eric is a physical therapist at DOAR North in Danville, Virginia. He is licensed by the Commonwealth of Virginia to provide physical therapy services.

A native of North Carolina, Eric earned a Bachelor of Science in Biology and Master of Physical Therapy degrees from the University of North Carolina at Chapel Hill. He joined the team at Danville Orthopedic & Athletic Rehab in 2000. He was voted as one of Danville’s Favorite Physical Therapist in the 2011 Rave Awards presented by Showcase Magazine.

Outside of work Eric enjoys playing golf, cheering on the Tarheels, and spending time with his daughter.