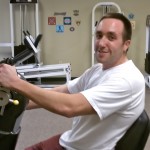 Recently, Clif had surgery to repair a cervical spine fracture to his C6 vertebra. After surgery, he began physical therapy at DOAR East to improve his cervical range of motion and decrease pain.

I wore a cervical collar (neck brace) for 13 weeks, but my neck didn’t heal correctly, so I had to have surgery.  My doctor put 4 screws and a plate in my C6 and C7 vertebrae. Four weeks later, I started physical therapy.

When I first started, I couldn’t turn my neck enough to look over my shoulders. I knew this had to improve so that I would be able to drive safely and comfortably. I was also worried that I wouldn’t have the range of motion needed to swing a golf club.

So far, my range of motion has improved significantly, and my pain has decreased. I haven’t been back on the golf course yet, but I did go bowling last week – and bowled my highest score ever!

Clif lives in Ringgold, Virginia. He is a salesman at Riverside Roof Truss.

Why did you begin physical therapy services at DOAR East?

I had a car wreck, and it triggered pain in my back, knees, and shoulders.  My doctor recommended physical therapy for my hips and legs.  Location was a major deciding factor for coming [to DOAR East] because I live down this way.  I keep coming because they are helping me.  [At physical therapy] I am stretching my muscles.  I’m hoping to continue physical therapy and add the upper body.  Having been a P.E. teacher, I felt that I knew what to expect [at physical therapy].

Describe your progress so far.

When I started, there was so much pain that when I stood up and started walking, it just hurt so much.  Now, just about all of the pain is gone from my knees.  I use my home exercise program on days when I don’t come in for therapy.  I am walking better and have a lot more movement than I had before.  I was doing a lot of yardwork, but I still can’t do that with my shoulders because of excruciating pain.

How would you describe your experience at DOAR East and what would you share about it with others?

It’s been excellent.  [The staff members at DOAR East] are really nice and fun to be around.  They are very conscientious.  I would share what a positive experience physical therapy [at DOAR East] has been for me.

When Johnny broke his heel bone after falling off a ladder and had to receive surgery, he came to DOAR East for physical therapy.  Johnny has been working with Joey Scearce, MPT, Cindi Mathena, PTA, and Raegan Clark, ATC.  He compliments the staff and the environment, saying “They are mighty good… the knowledge and experience — they know what they’re doing.”  Johnny also enjoys the convenience of DOAR East.  Since he can’t drive and has to have someone bring him in, the fact that DOAR East is close to where he lives matters a lot to him.

Johnny couldn’t move his ankle three weeks ago, but he says that he has 50% of his movement back after working with the staff at DOAR East.  He had never had therapy before and wasn’t sure what to expect, but he has learned a lot.  New exercises are added as he progresses.  He can do the marbles now, which he couldn’t do at all when he started, and he does stretching with the theraband.  Johnny is using a walker and going back to work.   He also has a whole lot of yardwork to do with 5 acres of grass to cut.  We wish you the best of luck with all that yardwork, Johnny!