Janice’s physical therapy story began in the summer of 2010, when she fell down a set of concrete steps. She broke her humerus bone, which is the upper arm bone that connects the elbow to the shoulder. After undergoing surgery and physical therapy, Janice was still in pain nearly a year later.  She decided to obtain a second opinion from another doctor, who recommended a total shoulder replacement surgery.

After this second surgery, Janice began physical therapy at DOAR South Boston, where she worked with Mike McClellan, MPT and Amy Comer, PTA.

When I first started physical therapy, my muscles were just mush!  I was unable to raise my hand to wipe off a mirror, or wipe down the kitchen counter.  I couldn’t reach up in my closet to take down a hanger. On day one of therapy, I couldn’t do any of the weight machines, even with zero weight. I could barely raise two pounds of weight.

Now, I actually have muscle. I can pull down 20 pounds, and I can raise six pounds.  I can do basic housework again.  I am still working on getting my hand back behind my head to use my flat iron – but I’m almost there!

Before my accident, I enjoyed walking for exercise. Now, I know I  have to continue my arm routine, so I still come exercise about twice a week through the Alumni Program.  I’m still working on strengthening my arm, and it is helping a lot. I’ve worked too hard to let it go!

I wouldn’t be as far as I am now if it hadn’t been for good therapists and my determination. The staff here has been my cheerleading squad. I owe everything to them – they’re a great bunch!

Janice works at the Department of Motor Vehicles. She lives in Clover, Virginia with her husband.

Vince is a physical therapy patient at TheraSport Summerfield, where he works with Diana Rizza, PT.

Last fall, Vince says that his pain was consistently a 7 or 8 on a 10-point scale. Climbing stairs and standing for long periods of time was difficult. He decided that it was the right time to undergo the total knee replacement that his doctor was recommending.

After the surgery,  Vince began home health physical therapy. When he was ready to progress to outpatient, Vince’s neighbor recommended TheraSport Summerfield.  He decided to give it a try because it is convenient to home.  Vince describes his experience below:

My time here has been excellent. When I started, my knee was continuously painful and my range of motion was strongly limited. Now, my right [surgical] knee is almost as good as the left knee, but I still can’t squat down or kneel on the floor. I’m working hard while I’m here and doing my exercises at home. My motivation is my 1966 Shelby Cobra replica that is just sitting in my garage, until I’m able to get in the floor to start working on it again!

After I’m discharged from therapy, I plan to continue my routine in the Alumni Program. There’s a lot of exercises that I can adapt to do at the house, but I would still like to come here to use the machines and the bike. Continuing to exercise will also help me lose weight and control my cholesterol.

Therapy has helped me to have a better quality of life. That sounds cliche, but that’s what it is to have confidence that my leg won’t give out.

Vince works at TIMCO Aviation Services in Greensboro. He and his wife reside in Summerfield. 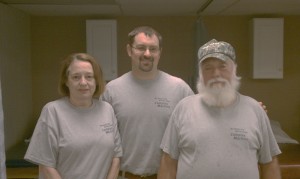 The Alumni Program offers past patients the opportunity to continue using the same facilities where they participated in physical therapy.  Alumni participants can complete maintenance exercises under staff supervision and keep up their strength and function.

Sandra has always exercised, but she particularly enjoys the Alumni Program because the environment is quiet and laid back and the staff members that she worked with during physical therapy are available for questions.  Roy did not exercise much before beginning the Alumni Program, but now he and Sandra come about three times a week to use the gym equipment and the pool.  Sandra and Roy complete exercises that they learned as patients during aquatic therapy and physical therapy.

To learn more about the Alumni Program and its benefits, contact the location where you received physical therapy.

Melodie is a past patient of TheraSport Physical Therapy and is currently a participant in the Alumni Program there.  She worked with Diana Rizza, PT and Amy Lynch, MPT.  Here is Melodie’s story, in her own words:

Why did you start physical therapy services?

Knee replacement brought me to physical therapy.  It was the best thing that ever happened to me, and the next best thing was finding TheraSport.  My home health therapist recommended TheraSport.  As soon as I walked in and met Diana and Darlene, I knew it was the right place.  I’ve also worked with Amy.

What was your favorite part of physical therapy?

You feel encouraged when you leave.  You’re happy you were here.  I always felt good, and I looked forward to coming back.  I think it’s the attitude of the employees, and I make friends.  The staff are all professional, but they know how to make exercise fun!  And fun and exercise are not usually two words I associate, but I do now.  You have fun when you come here — it’s not just exercise, it’s fun.  After my physical therapy prescription ran out, I have continued as part of the Alumni Program that you offer, and I’m really glad you do.  They’ll suggest different exercises [for me to do].

How would you describe your progress toward your goals?

They got me to walking again, without a limp.  Before my knee replacement, I was in a wheelchair or [using] a cane — I could barely walk.  I was almost immobile.  And I wanted to be able to travel to visit my grandchildren.  Now I can go up stairs, travel, anything I want to do!  My quality of life has really improved from coming.

Do you have a physical therapy story? Share it here!